Handwriting vs typing: is the pen still mightier than the keyboard?

Some neuroscientists think that giving up handwriting will impact on how future generations learn to read. Photograph: Erhan Dayi/Alamy

Computers may dominate our lives, but mastery of penmanship brings us important cognitive benefits, research suggests

In the past few days you may well have scribbled out a shopping list on the back of an envelope or stuck a Post-it on your desk. Perhaps you added a comment to your child’s report book or made a few quick notes during a meeting. But when did you last draft a long text by hand? How long ago did you write your last “proper” letter, using a pen and a sheet of writing paper? Are you among the increasing number of people, at work, who are switching completely from writing to typing?

No one can say precisely how much handwriting has declined, but in June a British survey of 2,000 people gave some idea of the extent of the damage. According to the study, commissioned by Docmail, a printing and mailing company, one in three respondents had not written anything by hand in the previous six months. On average they had not put pen to paper in the previous 41 days. People undoubtedly write more than they suppose, but one thing is certain: with information technology we can write so fast that handwritten copy is fast disappearing in the workplace.

In the United States they have already made allowance for this state of affairs. Given that email and texting have replaced snail mail, and that students take notes on their laptops, “cursive” writing – in which the pen is not raised between each character – has been dropped from the Common Core Curriculum Standards, shared by all states. Since 2013 American children have been required to learn how to use a keyboard and write in print. But they will no longer need to worry about the up and down strokes involved in “joined-up” writing, less still the ornamental loops on capitals.

This reform prompted lively controversy. In an editorial published on 4 September 2013, the Los Angeles Times hailed a step forward. “States and schools shouldn’t cling to cursive based on the romantic idea that it’s a tradition, an art form or a basic skill whose disappearance would be a cultural tragedy. Of course, everyone needs to be able to write without computers, but longhand printing generally works fine […] Print is clearer and easier to read than script. For many, it’s easier to write and just about as fast.”

Some states, such as Indiana, have decided to go on teaching cursive writing in school. Without this skill, they assert, young Americans will no longer be able to read birthday cards from their grandparents, comments by teachers on their assignments or the original, handwritten text of the constitution and the Declaration of Independence. “I have to tell you, I can’t remember the last time I read the constitution,” countered Steve Graham, a professor of education at Arizona State University.

This minor revolution is causing quite a stir but it is by no means the first of its kind. Ever since writing was most likely first invented, in Mesopotamia in about 4000BC, it has been through plenty of technological upheavals. The tools and media used for writing have changed many times: from Sumerian tablets to the Phoenician alphabet of the first millennium BC; from the invention of paper in China about 1,000 years later to the first codex, with its handwritten sheets bound together to make a book; from the invention of printing in the 15th century to the appearance of ballpoint pens in the 1940s.

So at first sight the battle between keyboards and pens might seem to be no more than the latest twist in a very long story, yet another new tool that we will end up getting used to. What really matters is not how we produce a text but its quality, we are often told. When we are reading, few of us wonder whether a text was written by hand or word-processed.

But experts on writing do not agree: pens and keyboards bring into play very different cognitive processes. “Handwriting is a complex task which requires various skills – feeling the pen and paper, moving the writing implement, and directing movement by thought,” says Edouard Gentaz, professor of developmental psychology at the University of Geneva.

“Children take several years to master this precise motor exercise: you need to hold the scripting tool firmly while moving it in such a way as to leave a different mark for each letter.”

Operating a keyboard is not the same at all: all you have to do is press the right key. It is easy enough for children to learn very fast, but above all the movement is exactly the same whatever the letter. “It’s a big change,” says Roland Jouvent, head of adult psychiatry at Pitié-Salpêtrière hospital in Paris. “Handwriting is the result of a singular movement of the body, typing is not.”

Furthermore pens and keyboards use very different media. “Word-processing is a normative, standardised tool,” says Claire Bustarret, a specialist on codex manuscripts at the Maurice Halbwachs research centre in Paris. “Obviously you can change the page layout and switch fonts, but you cannot invent a form not foreseen by the software. Paper allows much greater graphic freedom: you can write on either side, keep to set margins or not, superimpose lines or distort them. There is nothing to make you follow a set pattern. It has three dimensions too, so it can be folded, cut out, stapled or glued.”

An electronic text does not leave the same mark as its handwritten counterpart either. “When you draft a text on the screen, you can change it as much as you like but there is no record of your editing,” Bustarret adds. “The software does keep track of the changes somewhere, but users cannot access them. With a pen and paper, it’s all there. Words crossed out or corrected, bits scribbled in the margin and later additions are there for good, leaving a visual and tactile record of your work and its creative stages.” 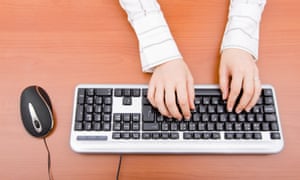 Handwritten copy is fast disappearing from the workplace. Photograph: Alamy

But does all this really change our relation to reading and writing? The advocates of digital documents are convinced it makes no difference. “What we want from writing – and what the Sumerians wanted – is cognitive automaticity, the ability to think as fast as possible, freed as much as can be from the strictures of whichever technology we must use to record our thoughts,” Anne Trubek, associate professor of rhetoric and composition at Oberlin College in Ohio, wrote some years ago. “This is what typing does for millions. It allows us to go faster, not because we want everything faster in our hyped-up age, but for the opposite reason: we want more time to think.”

Some neuroscientists are not so sure. They think that giving up handwriting will affect how future generations learn to read. “Drawing each letter by hand substantially improves subsequent recognition,” Gentaz explains.

Marieke Longchamp and Jean-Luc Velay, two researchers at the cognitive neuroscience laboratory at Aix-Marseille University, have carried out a study of 76 children, aged three to five. The group that learned to write letters by hand were better at recognising them than the group that learned to type them on a computer. They repeated the experiment on adults, teaching them Bengali or Tamil characters. The results were much the same as with the children.

Drawing each letter by hand improves our grasp of the alphabet because we really have a “body memory”, Gentaz adds. “Some people have difficulty reading again after a stroke. To help them remember the alphabet again, we ask them to trace the letters with their finger. Often it works, the gesture restoring the memory.”

Although learning to write by hand does seem to play an important part in reading, no one can say whether the tool alters the quality of the text itself. Do we express ourselves more freely and clearly with a pen than with a keyboard? Does it make any difference to the way the brain works? Some studies suggest this may indeed be the case. In a paper published in April in the journal Psychological Science, two US researchers, Pam Mueller and Daniel Oppenheimer, claim that note-taking with a pen, rather than a laptop, gives students a better grasp of the subject.

The study focused on more than 300 students at Princeton and the University of California, Los Angeles. It suggested that students who took longhand notes were better able to answer questions on the lecture than those using a laptop. For the scientists, the reason is clear: those working on paper rephrased information as they took notes, which required them to carry out a preliminary process of summarising and comprehension; in contrast, those working on a keyboard tended to take a lot of notes, sometimes even making a literal transcript, but avoided what is known as “desirable difficulty”.

On the basic issue of handwriting France has chosen to take the opposite course from the US. In the early 2000s the ministry of education instructed schools to start teaching cursive writing when pupils entered primary school [aged six]. “For a long time we attached little importance to handwriting, which was seen as a fairly routine exercise,” says school inspector Viviane Bouysse. “But in 2000, drawing on work in the neurosciences, we realised that this learning process was a key step in cognitive development.”

“With joined-up writing children learn words as blocks of letters, which helps with spelling,” Bouysse explains. “It’s important in a country where spelling is so complex! However, the ornamental capitals in the patterns published in the 2013 exercise books have been simplified, with fewer loops and scrolls […] They are important, though, because they distinguish proper names or the start of a sentence.”

Some handwriting advocates regret the disappearance of these ornamental effects. “It’s not just a question of writing a letter: it also involves drawing, acquiring a sense of harmony and balance, with rounded forms,” Jouvent asserts. “There is an element of dancing when we write, a melody in the message, which adds emotion to the text. After all that’s why emoticons were invented, to restore a little emotion to text messages.”

Writing has always been seen as expressing our personality. In his books the historian Philippe Artières explained how doctors and detectives, in the late 19th and early 20th century, found signs of deviance among lunatics and delinquents, simply by examining the way they formed their letters. “With handwriting we come closer to the intimacy of the author,” Jouvent explains. “That’s why we are more powerfully moved by the manuscript of a poem by Verlaine than by the same work simply printed in a book. Each person’s hand is different: the gesture is charged with emotion, lending it a special charm.”

Which no doubt explains the narcissistic relationship we often entertain with our own scrawl.

Despite omnipresent IT, Gentaz believes handwriting will persist. “Touchscreens and styluses are taking us back to handwriting. Our love affair with keyboards may not last,” he says.

“It still plays an important part in everyday life,” Bustarret adds. “We write by hand more often than we think, if only to fill in forms or make a label for a jam jar. Writing is still very much alive in our surroundings – in advertising, signing, graffiti and street demonstrations.” Certainly the graphic arts and calligraphy are thriving.

Perhaps, in their way, they compensate for our soulless keyboards.

This article was first reported on: https://www.theguardian.com/science/2014/dec/16/cognitive-benefits-handwriting-decline-typing

Scriveiner Rated as the Best Mechanical Pencil by Ode Magazine!

Coronavirus: 'I'm self-isolating - but I have 26 pen pals'